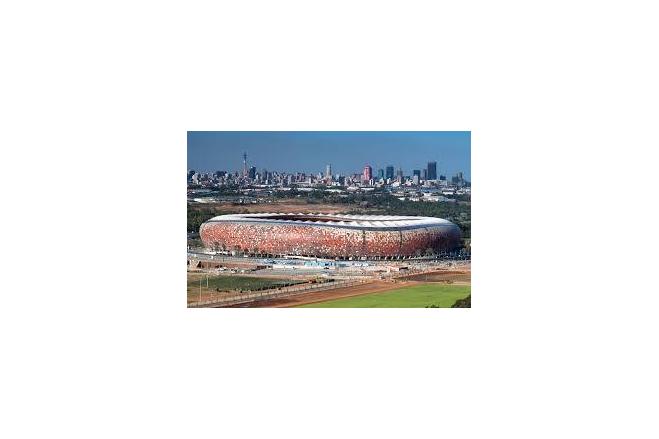 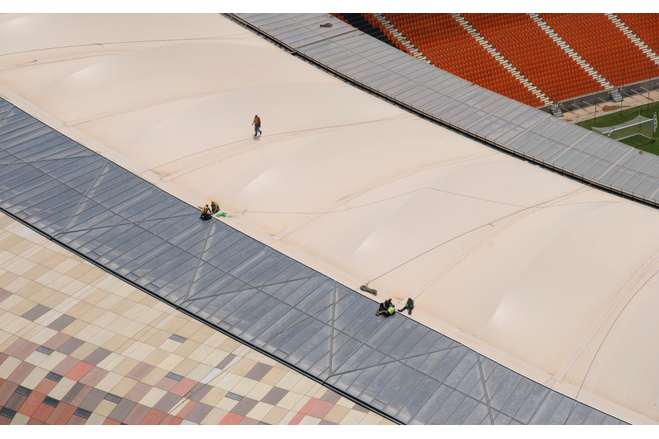 The earth coloured ‘African Pot’, the traditional calabash, as a melting pot of cultures can be seen as the unique PanAfrican symbol. This was the main idea of the architects for the design of the biggest stadium on the African continent. The stadium can accommodate 94.000 spectators. The three tier levels can be reached via curved inner and outer ramps.
The Stadium is located in close neighbourhood to Soweto. Historical parts of the upper tier level of the old stadium (built in 1987), where Nelson Mandela was present during important events have been retained and conserved, whereas the whole rest of the stadium has been newly built. Specially arranged coloured façadepanels with 6 colours and 3 textures on the surface changing from darker to lighter colours on the top as well as the light coloured upper membrane blend into the natural surroundings of the typical local ‘minedumps’.
Starting from the architects images and ideas, schlaich bergermann und partner designed and developed the optimized structure for the huge roof and the façade structure in close corporation with the structural engineers of the concrete tiers structure, PDNA of Johannesburg.
The overall shell geometry (roof and façade) derives from a torus with an outer diameter of 300m which was defined in section with varying radiuses.

As the opening of the roof and the surrounding spatial ring truss (the most important structural element) follow the rectangular shape of the field and the arrangement of the tiers, both geometries combined create an impressing 3-dimensional curved structure.
The 800m long spatial ring truss with its 3 chords (circular sections) is clad with polycarbonate panels. It is supported by 12 concrete shafts and 16 columns only. The roof cantilever truss (open sections) length over the tiers is 38m. The cantilevers are clad with arch supported PTFE membrane on the top side and an open mesh Glass/PTFE membrane on the bottom side. For the cladding of the inner edge of the roof also polycarbonate panels were used.
Different from many arch supported membrane roofs for stadia, the soccer city stadium uses a radial arch arrangement. This considers the comparative small panel size as well as the architectural idea of the “finger formed clay pot”.

The slim shell structure of the façade, designed as curved steel beam is supported on inclined concrete columns and fixed on the top to the spatial ring truss. The glassfibre reinforced 13mm thick concrete façade panels 1,2m x 3,6m have been fabricated with natural colours and different textures and arranged exactly according to the architects special patterning design.

Material of the cover